The Prodigal Livejournal User is back again. I can't promise I'll be good about posting, but at least I'm here today (I actually ended up logging in so I could comment on an LJ friend's post)

I've found that I just don't have enough time in each day to keep up with LJ and with all the other online accounts I manage. Between the Library's new Twitter account, the website and the facebook page (all of which I manage) I spend most of my day logged into multiple sites. And then, when I get home, I pretty much avoid my computer.

But, I miss LJ. I miss my LJ friends. And I constantly feel near-to-bursting with things I want to share with everyone. Some of it manages to leak out into our family blog (username: Autumn, password: widget) or onto facebook. And some snarky things get posted on twitter (@librarychristi). But a lot of it just gets reabsorbed in The Crazy that is my life.

So, yeah. I have great intentions. And I think about LJ (and my LJ friends often). Thankfully, a lot of you are hanging around on the rest of ze Interwebz so I can wave from time to time.

I'm kicking myself for blanking during Girl Scout cookie sign-up month. Scott usually orders cookies from his co-worker's daughter and didn't this year (how? how could he not??) Now we have to drive around town and hope to find a group of unsuspecting Girl Scouts and jump them for their goods. Wish me luck...I don't run as fast as I used to.

Well, this is embarrassing. Talk about long absences from the blogosphere! I haven't posted in over thirteen months. Months!

I remember precisely when I stopped writing, too. It was just around my 30th birthday and just before Christmas. I found out I was pregnant...but I just couldn't talk about it. I was so elated and excited and nervous. I was afraid that if I put it in print it would just go away, like times before.

And then there was the Caldecott stuff. I was kind of afraid of talking about that, too. There was only so much that I was allowed to say (not much) and I became concerned that I would mess up and say The Wrong Thing. And it would be online FOREVER.

So, with two big things in my life that I couldn't talk about I just didn't know what to say anymore. After awhile I fell out of the habit of even checking LJ. So, my apologies for falling off the face of the earth. And apologies for not keeping up with all of you! (I say that as if there are still people even reading what I write).

For the curious...the pregnancy was successful :) I now have a lovely baby girl named Autumn Juliet. She's nearly five months old now and is truly the most amazing thing I've ever accomplished. The second most amazing thing, at least right now, being the 2010 Caldecott Medal and Honor Books (well, selecting them with a committee):

Medal:
The Lion and the Mouse written and illustrated by Jerry Pinkney

On Thursday I turned 30. And I became a brunette.

The former I didn't really have much control over. It was more a factor of when my parents got married (1977) and when I was born (1978). But it happened and I accept it, with optimism and hope.

I guess you could say I didn't have much control over the latter, either. It was really the result of a decision I made in the summer - the bold decision to support teen reading by dyeing my hair pink. I learned on Thursday that 1) you should always go to a professional to dye your hair and 2) aluminum-based pink dye loves blonde hair. L-O-V-E-S, Loves. (or, better put, spending $10 on cheap Walgreens brand hair dye may mean you'll have to spend $100 to go back to a natural color...which probably won't be your own)

Despite the fact that I didn't have much control over these two events, I am embracing them as forward movement of my life. I'm a new person: figuratively and, almost, literally.

Tonight we celebrate the former event with a pinata. I've always wanted a pinata for my 30th birthday *grin*
Ole!

Last night I had a horrifying dream...I was Buffy's little sister, Dawn (no, that wasn't the horrifying part) and I was being stalked by a serial killer. The twist, though, was that the serial killer was The Invisible Man. How's that for creepy?

I'm guessing the dream was the result of watching too much Dexter and reading too many graphic novels. Either that, or our house's poltergeist is now able to bug me in my dreams. 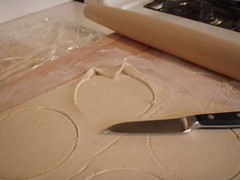 Cutting the pastry
Originally uploaded by CDaisyM.
This weekend I baked with puff pastry for the first time and, man, is that stuff awesome! Click through the picture to see what I made with it. Let's just say Nutella was involved... 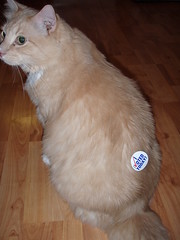 Igby Voted
Originally uploaded by CDaisyM.
I've been meaning to post this since I took it on Tuesday. As much as I adore my kitties, I truly believe that the number one reason we have them is to do funny things to them and then to take pictures. Yes, I'm evil. And I'm okay with that.

When I got home from my appointment Tuesday night I promptly put my "I Voted" sticker on Igby. You can't tell here, but he didn't like it too much. (Calli voted, too, but she voted for Meow-cain)

I have so many things running through my head right now that I'd like to write about...the memorial bench for Scott's dad, the election results, doctors' appointments, the fact that it's already November, the craziness that is my job. But I'll stick with just saying hi. I haven't been able to keep up with reading everyone's posts on LJ, so I'm a little out of touch with how everyone is doing. I do think of you all often, though! 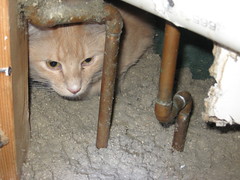 "I'm Stuck"
Originally uploaded by CDaisyM.
As I haven't been so great about posting here on LJ, I haven't shared our Laundry Saga. Let's just say S and I have become quite familiar with the local laundromat. We have not had a working washer and dryer in our place since we moved in July. We ordered new machines on Sept. 2...and we hope that, by this Saturday, they'll finally be installed and working. Yeah, six weeks later.

To add to the Saga, we had an adventure this weekend. The new machines were finally delivered (and the old ones hauled away) on Friday, during my parents' visit. Saturday morning we all were sitting in the living room, drinking coffee, when S mentioned he hadn't seen Igby in awhile. And we had noticed that Calliope was quite dusty. An hour of searching later, we found the guy...pictured here.

Apparently, the hole around the pipes to the washing machine was covered only with a thin piece of mesh that was attached to the wall with one nail. We had never paid it much attention because it had been blocked by the old machines. Of course, once it was unblocked, the kitties found the hole and went inside. Calli is small enough to get in and out. Igby...well, Igby's a Big Boy and was trapped behind the pipes. We knew he was really stuck when food and catnip failed to lure him out.

We ultimately had to cut part of the wall to get the poor guy out. Needless to say, he was quite dirty (and a bit ashamed) once he was free. 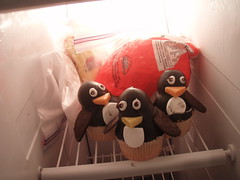 Chilly Willy and Friends
Originally uploaded by CDaisyM.
This weekend I made penguin cupcakes with Ian (and his mom and stepdad). As it was a warm and rainy day, the penguins quickly high-tailed it to the freezer.

Click on the picture to see the whole process (including penguin-devouring).

Our photo set was so cool it even made it onto "Cupcakes Take the Cake"! 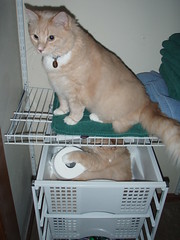 In the closet
Originally uploaded by CDaisyM.
I think I need to buy new toilet paper...
Collapse